South Africa – The Other Multihull Country

There is no doubt that with their large industrial groups, the French currently dominate world multihull production. With their huge market, the United States is the industry’s engine. We admire the Aussies and Kiwis for their passion for everything that sails (quickly ideally) on two or three hulls. But who ever mentions South Africa? This is a country where boat culture and production (particularly catamarans) have been firmly entrenched for decades. Behind the giant Robertson & Caine, there are lots of smaller shipyards which, when taken as a whole, make the Rainbow Nation the “other multihull country”. Multihulls World took a closer look.

Despite their world cup winning exploits in 2019, South Africans aren’t just great rugby players. Among their other qualities (resilience being one of them) they have carved out a substantial niche in the multihull construction industry. So how does a country that was shunned for decades because of its apartheid regime manage to succeed in its export markets? And how does a country that is far from the well-sailed wake of the favored sailing regions and with minimal internal demand become the world’s second biggest catamaran builder? At 35 degrees south, the climate is pretty good, but the swell, with no other land masses to get in the way of it, can be huge. The weather can also be capricious, with violent storms coming from the Indian Ocean, and depressions rushing from east to west down in the roaring forties. Add to all this the grim reputation of Cape Agulhas (which separates the Indian and South Atlantic Oceans) and it’s clear to see that it’s not a boating paradise for hedonistic sailors. Unsurprisingly therefore, Springbok catamarans (the rugby team’s nickname) have traditionally been pretty solid. Even though they didn’t previously have the technology to build lighter-weight boats, the demanding sailing conditions justified super-solid construction, and this is still part of the mindset. For a long time, their rigging used double shrouds when their European counterparts were using single ones. The sails were also made from heavier cloth to survive the long delivery trips – usually to the Caribbean. Today, most multihulls reach those more peaceful waters on cargo ships. Yet a whole generation of young skippers got some amazing experience sailing multiple transatlantic crossings from the Cape of Good Hope to the West Indies. 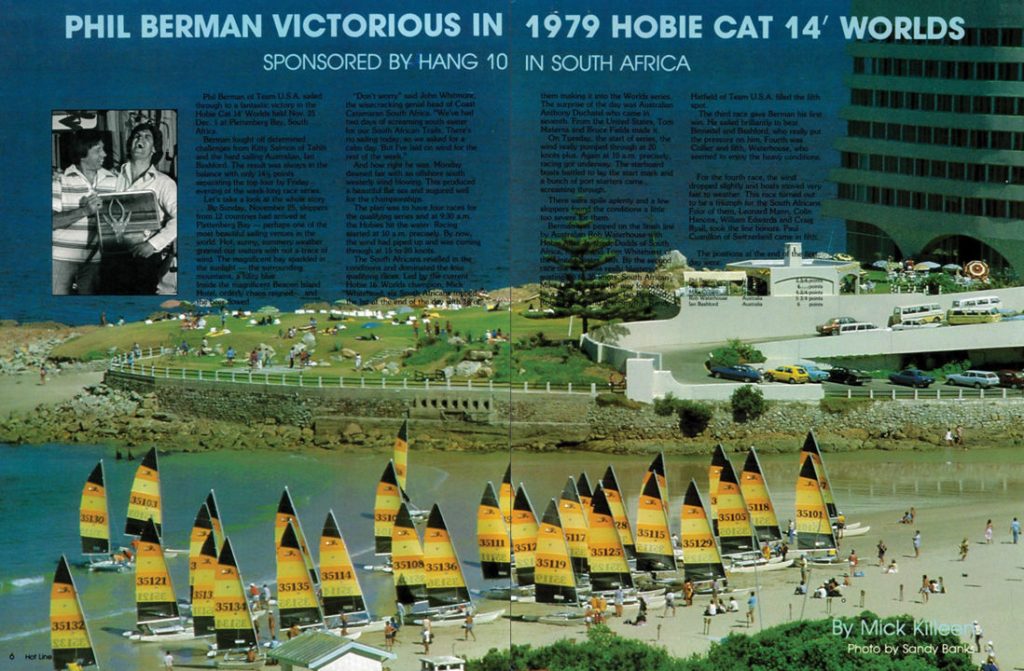 40 Years ago, a Hobie 14 competition changed everything!

Looking back across recent history, there would seem to be three main stages in the development of multihull construction in Nelson Mandela’s homeland. First of all, let’s go back 40 years. It was December 1979, so midsummer in the southern hemisphere. The fifth Hobie Cat 14 World Championships were being organized by South Africa, at Plettenburg Bay, 30 miles east of the small tourist town of Knysna. The competition was won by the US and a certain Phil Berman, who we will come back to later. More importantly, the 72 brand-new Hobie Cats which were used for the competition, were sold for peanuts after the end of the competition and won over the skippers who up until then had sailed on monohulls. On board their IOR prototypes, they could be seen on the waters around Cape Town and Durban every Sunday. This was the era of John Robertson, Jerry Caine, Duncan Lethbridge, and the experience stayed with them.